Multi-award winning film editor, Haiko Boldt, started editing around 2003 at ONE Africa Television after sitting in on a lot of edits with the station’s Technology Officer, Madryn Cosburn. In 2007, Boldt decided to freelance as a Graphic Designer and Editor. For Boldt, film editing took off in 2010 as he had the opportunity to edit multiple short and feature films in the years after until now. Ever since Boldt has received best editor nods for multiple films.

Boldt, who is also the owner of Thunderboldt Design & Post Production, is working as Editor and Cinematographer on filmmaker Tim Huebschle’s upcoming feature film, #LANDoftheBRAVEfilm.

Namib Insider caught up with Boldt to talk more on his journey and the film.

What was your very first job in film and how did you get it?

Talking specifically long-form feature or made for TV film I think my first direct job was helping the grip department hauling around sandbags and heavy equipment. This was a made for TV production for a German television station. I was lucky that I was sharing office space with the service production company working on the movie. They needed people for the grip department and asked if I was keen. Of course, I was.

What are some of the films you have worked on that you are most proud of?

I have worked on quite a few short films and can’t single out a specific one. I feel I have learnt something from each film I have edited. The film ‘Katutura’ by Florian Schott is special to me because it was the first fictional feature I edited. I am very proud of #LANDoftheBRAVEfilm because I did not only get to edit it, I also got to film it.

What attracted you to editing above all industry jobs?

I fell into editing. I was asked if I like to give it a try, I did and I enjoyed it. So there was no conscious decision to venture into editing specifically. My early work was mostly promotional videos, small adverts and documentary videos. What kept me continuing was that I enjoyed it. At the time when I decided to go freelance, there was a niche market as an editor in Namibia which I decided to focus on and pursue.

What editing system did you use, and why?

The choice of editing system for me is like any other. For example, a phone where you prefer the interface, functionality and look over another. It also happened by circumstance. I started off on a Media100 system, back then you still needed a whole room with equipment for the edit suite. That changed when everything became more digital and computer-based. We were working on Apple computers and Apple released Final Cut then, so we started using that. Over the years I have tried Premier Pro but just didn’t like the way the interface and software functioned and switched back to Final Cut X which is really fast for me to edit in. And recently, I have been using DaVinci Resolve as well and have started using that more because it covers all sections of the post-production workflow and the standard version is free.

After and Before teaser frames of #LANDoftheBRAVEfilm 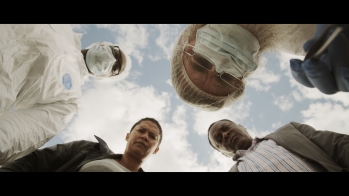 After and Before teaser frames of #LANDoftheBRAVEfilm

You worked on the upcoming feature film, #LANDoftheBRAVEfilm, tell us about that experience.

It was and still is an awesome experience. I have been involved with the project for a long time. From reading an early script to location scouting on weekends with Director Tim Huebschle, table reads filming, castings in the beginning and then the final production. I am extremely fortunate to have been asked by the film’s Producer David Benade to film #LANDoftheBRAVEfilm and edit it. The filming process started with an extensive storyboarding session with the Director which took about 5 weeks. We thought about every shot and angle and discussed how it might look in the edit. We even added background pictures of the locations that were going to be filmed at. The production was intense. Long days, cold early mornings, rain in July and late nights that turned into early mornings. The cast and crew are all wonderful to work with. All were very motivated to make this film amazing. Personally, it was positively challenging as it was my first feature film as a Cinematographer. It meant a lot of research, study and preparation. I received a lot of support and I am very grateful for this. The edit went quite smooth because we had planned so much starting with the storyboard. Together with the Director, we worked out a system of editing in the mornings and making selections in the afternoons and David Benade cleaned up the audio on the weekends. This left us with a very solid first cut. All in all, we had a very good workflow and this made the edit easy.

So you are the man who sees this film before anyone else. What is your impression?

I am extremely happy with the outcome. It is a wonderfully authentic film, firmly rooted in Namibia. The passion and engagement of cast and crew are evident throughout and I think Namibians will definitely enjoy it.

As an editor, is there a piece of advice you’ve gotten at some point along the way that’s stuck with you?

Which part of the editing process do you enjoy the most? And the least?

Editing feature films is definitely one of my favourite things to do as an editor. There are parts of the process which are just not that creative which are less enjoyable like syncing the audio to the video or setting up the project. But these are vital steps to be able to make the rest of the project more fun to work on. The part which is most enjoyable is, once you have selected which takes to use, cutting the story together. Deciding when to add tension or what to reveal, adding energy to a section through faster cuts. Or turn it all around and trying again like a puzzle starting off with a different shot. Remembering that in a different take apart could work for this cut. And then finally ending up with an edit that flows. That is a great feeling and a lot of fun.

Any thoughts on the Namibian film industry? What should be done to further grow the industry?

I think the Namibian film industry will always be small because we are a small country. To say we want to grow the industry is a very general goal. Grow it into what? If we don’t have a specific goal in mind how can we measure our progress? So maybe the industry has grown but just not as what we imagined personally. I feel it has grown, there are a lot more production companies than a few years ago. But that is only one aspect. In my opinion, if we want to grow we need to grow as individuals. We need to keep practising. Keep making films. Improve ourselves through studying our craft and through sharing. There are so many resources online and some of them free. We also have to approach filmmaking as a business. Otherwise, we will stay artists who don’t sell their creations and thus don’t make money which won’t enable us to grow. It’s not about resources, but about resourcefulness. Namibia has so many beautiful stories still waiting to be told.