A collaboration between Cape Town City Ballet Company (CTCB) and the College of the Arts (COTA), Cinderella & Her Prince is a large cast ballet production directed and choreographed by the Artistic Director of the CTCB, Robin van Wyk.

Chante Daniels, one of the new rising stars of the CTCB, takes on the role of Cinderella in the production. Daniels, having just danced the leading roles in the latest season of Amaranth, will star alongside season dancer, Craig Pedro as the Prince. Pedro also co-choreographed the production.

According to Zaandre du Toit from the CTCB, Cinderella & Her Prince is choreographed in a very traditional style of classical ballet.

“Craig and Robin discussed the choreographic styles and steps to ensure that the Cape Town City Ballet Principals are pushed a bit harder and the children are challenged and given steps they have not done before – we also focused on patterns and grouping so as keep the production moving and exciting. Also casting COTA students as Ugly Sisters gave them a chance to work on their acting skills,” du Toit said.

Based on the roles van Wyk created for the young COTA students, audiences can expect stellar performances as their individual roles aim to challenge them to new heights in their ballet careers.

“There will also be principal dancers coming from Cape Town to inspire the young ballet dancers, encouraging them to become better dancers. These professional dancers also are a delight to watch not only from a young dancer’s point of view but also an audience member,” du Toit noted.

The relationship between COTA and CTCB has been nurtured over the last four years with Cinderella & Her Prince becoming their third collaborative project.

Du Toit highlighted that the relationship between the two entities affords children the chance to work with the Artistic Director of a professional ballet company – teaching them to work in the corps de ballet, to work as a team, to learn pas de deux skills – to learn new steps – breaking away from the everyday syllabus.

Caitlin Smith from the CTCB as the Godmother in the production. 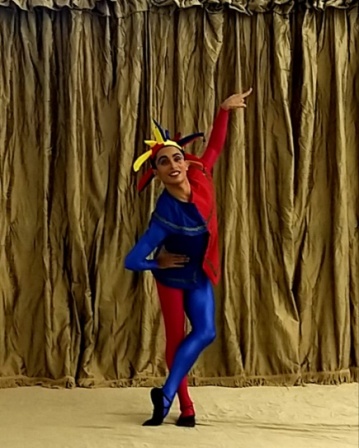 Jordan Roelfze from the CTCB as the Jester in the production.

Du Toit further added that the production is made up of a well-rehearsed cast of children in many diverse roles, exciting pas de deux from the principal dancers of Cape Town City Ballet and the seamless joining of professionals and students into an enjoyable production for the enjoyment of the whole family.