Schott talks more about the international success of the film:

Baxu and the Giants is doing really well internationally, with three international wins so far. Why do you think the film is performing so well?

I had the privilege to watch the film with audiences in three different countries so far and everywhere we go our story really seems to connect emotionally with the people watching it. I think that no matter where you come from you can easily understand Baxu’s motivations and connect with her moral dilemma. 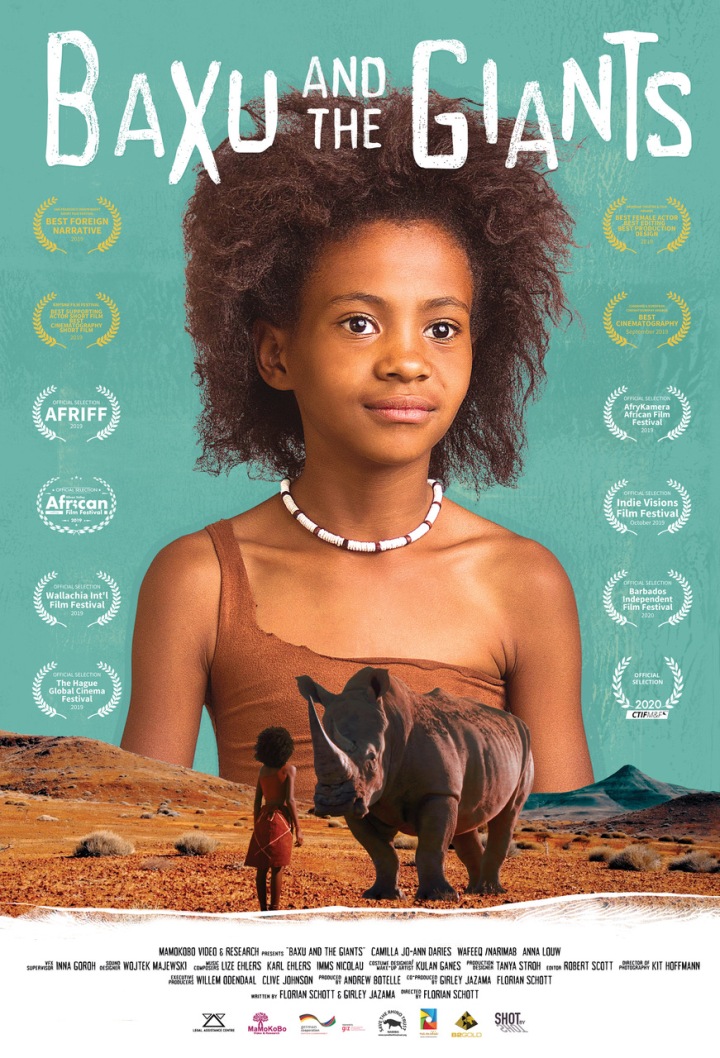 The film has screened at a number of festivals and is scheduled to screen at more festivals over the next few months. What is the importance of film festivals, for you as a filmmaker and for Baxu and the Giants as an anti-rhino poaching activism piece?

Our strategy for this film was always two-fold.  First, bring the film to Namibian audiences, especially children and teenagers. We are busy planning this right now. Bringing the film to schools, do more public screenings all around the country and show the film villages that are most affected by Rhino poaching. Secondly, we want to raise awareness on the issue of rhino poaching of Namibia. In travelling with the film to festivals we chat to audiences about the importance of conservation and the urgency of this issue. Next to this – for me as a filmmaker – these film festivals are great places to showcase Namibian film, to network, to watch independent cinema from around the world and to chat to potential partners when it comes to distribution but also potential future projects.

Related: Review: Baxu and the Giants

You have done a number of films, where would you place Baxu and the Giants in terms of success compared to your other films?

This is such a difficult question. I think all of my films had very different goals, so it’s almost impossible to compare them. For Everything Happens for a Reason I was just glad that people were interested in the film, and I had a bit of financial success with it, winning the Afrinolly Short Film Competition in Nigeria. Katutura probably had the biggest impact when it comes to expectations for a Namibian film. I think our biggest success with that was proving clearly that Namibian audiences are interested in watching well-made Namibian stories if you give them the chance to. Baxu and the Giants is really well received, both in Namibia and internationally, and I hope that this film can be a part in making a real difference in the fight against rhino poaching. And it hopefully inspires other filmmakers to think of the youth and children as potential audiences for their stories.  But as I mentioned, it’s almost impossible to compare.  I am very happy with the reception of all of my films.

“It’s very comforting that you share the experience of being an independent filmmaker with so many other filmmakers from around the world.” – Florian Schott

Overall, has the response to Baxu and the Giants stacked up to your expectations?

Yes, it actually went way beyond my expectations. We did foresee a positive response from a Namibian audience but the international response, especially from children and teenagers both in Namibia and outside of the country, the way people identify with Baxu and her story, is really beautiful.

You have travelled to a number of countries with the film. Is there something you’ve learned about films you’d like to share?

As a filmmaker, you learn a bit with every film you watch, every conversation you have with fellow filmmakers and I am privileged to be able to watch a lot of films that are not available in cinemas or online at these festivals. It’s very comforting that you share the experience of being an independent filmmaker, with all its struggles – especially in terms of development, budget and distribution – with so many other filmmakers from around the world.

So, Baxu and the Giants is enjoying international attention now, coming back to Namibia, are there any plans to show the film in other towns other than Windhoek?

Yes. We have two more public screenings in Windhoek planned, optimally this year still.
The Legal Assistance Centre (LAC) already brought the film to various schools around the country and we are busy putting a plan together to bring the film to all corners of Namibia in 2020.

Baxu and the Giants follows Baxu (Jo-Ann Daries), a 9-year old girl who is in touch with nature and tradition but toughened by life in poverty, lives with her older brother Khata (Wafeeq /Narimab) and their alcoholic grandmother (Anna Louw) in a village in Damaraland, Namibia. Schott co-wrote the film with Girley Jazama.