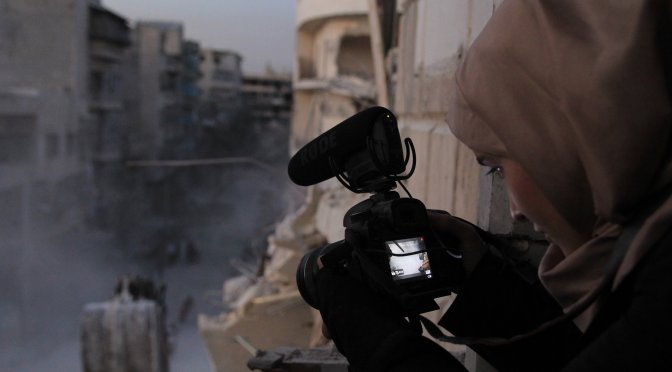 The film, following Waad’s life through five years of the uprising in Aleppo as she falls in love, gets married and gives birth to Sama, forms a line-up of films from Germany, Sudan and South Africa which will be screened at the Goethe Instituut Windhoek over the course of 2020.

Apart from For Sama, films that make up the first half of the Cinemaverse programme are Transit by Christian Petzold, Akasha by Hajooj Kuka, Systemsprenger by Nora Fingscheidt and Sew The Winter To My Skin by Jahmil X.T. Qubeka. The second-half programme for Cinemaverse is currently being put together.

Cinemaverse is co-curated by Namibian filmmaker Florian Schott and Zimbabwean filmmaker Nocks Chatiza. According to Schott, the idea of ‘Cinemaverse’ was born out of the need for films outside of the mainstream.

“Many Namibians now have access to DStv, to Netflix and films that screen at Ster Kinekor. But there are so many cinematic gems out there, beautiful, moving and important films that unfortunately Namibians don’t have access to on their usual distribution channels.  In the last few months, I’ve travelled to film festivals around the globe, from Munich to San Francisco to Warsaw, to Lagos and to Knysna, and I watched many wonderful films that I felt would be appreciated by Namibians, films that deserve to be screened far and wide, their messages being meaningful and important for Namibian audiences as well,” Schott says.

Around mid last year, Schott, along with a number of other Namibian artists from different sectors were invited to the Goethe Institute to discuss planned exhibitions and programmes.

“As I fondly remember AfricAvenir’s cinema series, which Hans-Christian Mahnke curated and organised but sadly had to stop a few years ago due to workload and budget, I suggested bringing independent films back to Namibia. In AfricAvenir’s film series I watched so many fantastic films I wouldn’t have gotten the chance to watch otherwise that changed my view on film and sometimes the world.  Controversial South African film Of Good Report comes to mind, so does the classic The Battle of Algiers,” Schott explains.

When approached by Goethe to curate a similar program, Schott knew Chatiza, who just recently moved to Windhoek, was the first and only choice to curate with him as he has experience with film festivals and independent films.

“The task was to not only bring African independent films to Goethe but also independent films from outside of Africa.  In my extensive travels over the last few months, I watched many great films that I knew immediately that I wanted to bring to Windhoek, but I’m also regularly visiting film sites such as Indiewire to see what is happening in independent cinema around the world.  So our idea was to have films and stories that are diverse, relevant and definitely different from the mainstream. By the way, we are always open to great ideas and great films we might not know yet,” Schott adds.

For Chatiza, art-house films- especially those with a strong storyline- derive passion. He notes without a good story there can not be a good movie.

“I believe as much as films should entertain the audience – they should also have social, moral and educational values. Films should be always about a Characters’ journey and character fulfilment, not about glitz and glamour, technology superiority and product marketing like what we see daily in the mainstream cinemas. Cinemaverse gave me the opportunity to experience and share those films that I believe their storyline will emotionally move/touch the audience. I love to use storytelling and film as a tool for positive social change,” Chatiza says.

As a filmmaker himself, the films being screen at Cinemaverse are films Chatiza would like to produce and share with the world.

“Not abstract storylines but human storylines. I want to make stories about human struggles for survival in their own right and at the same time showcase both sides of human internal conflict, love vs hate, good vs bad,” Chatiza expresses.

Chatiza has been involved in film festivals in Berlin, Noway, South Africa, Zimbabwe and Zambia and it is his hope that Cinemaverse succeeds in bringing unique films to the Namibian audience and growing the film viewing culture that will enable the growth of the Namibian film industry.

The next Cinemaverse film Transit by Director Christian Petzold will be screened on 4 March at the Goethe Institute. The film is about a man who flees France after the Nazi invasion and assumes the identity of a dead author. Stuck in Marseilles, the man meets a young woman desperate to find her missing husband – the very man he is impersonating.

Entrance to the Cinemaverse is free. Below is the first programme:

What Everyone Is Reading